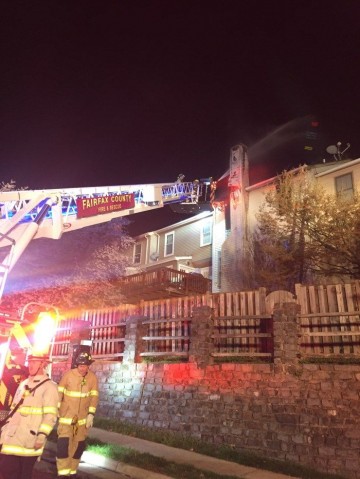 On Thursday, March 30, at approximately 4:23 a.m., units were dispatched for a fire in a townhouse in the 6900 block of Compton Valley Court in the Centreville section of Fairfax County.

Upon arrival, units found a three-story, middle of the row townhouse with fire and smoke showing from a second floor window in the rear of the home. The fire appeared to be rapidly spreading to the attic. Firefighters quickly extinguished the fire. They were able to contain the fire to the second floor and the attic. There were no civilian or firefighter injuries reported.

The occupants of the home were alerted to the fire by working smoke alarms and called 911.

Fire Investigators determined that the fire started in an upstairs bedroom. The fire was accidental in nature and was caused by an electrical event involving a desk lamp.

Four adults and two children were displaced as a result of the fire. Red Cross assistance was offered and accepted by the occupants.