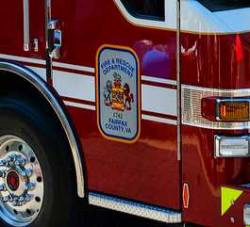 Fairfax County Fire and Rescue Department units responded to a structure fire Sunday, January 5, 2014, at approximately 4:05 p.m., in the McLean area of Fairfax County. The maintenance and storage building is on the grounds of the Madeira School, 8328 Georgetown Pike.

The building is a total loss.

The fire is under investigation.