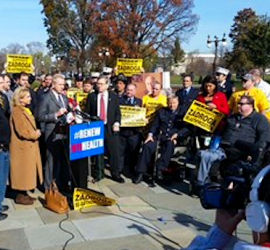 Washington, D.C. (via IAFF.org) - The IAFF is moving aggressively on all fronts to make sure members of Congress do not go home for the holidays without passing the James Zadroga 9/11 Health and Compensation Reauthorization Act. In print, online and in person, the remaining lawmakers who have not yet voiced support for renewal of the Zadroga Act are getting an earful from the gold and black.

“The time has come for Congress to renew the Zadroga Act. We are making sure the public understands which lawmakers truly support those who risked their lives at Ground Zero, and those who do not support those brave men and women,” says General President Harold Schaitberger.

In addition to the consistent pressure on Congress by IAFF staff lobbying to move this bill, dozens of IAFF affiliate members joined police officers and war veterans November 17 for a rally and press conference at the U.S. Capitol to demand passage of a bill that would renew compensation and health benefits for the tens of thousands who have become ill as a result of toxic exposures from the recovery effort at Ground Zero after 9/11.

This event marked the 19th time this year that IAFF members from New York and other states have stormed Capitol Hill to pressure Congress to act on Zadroga funding, which expired in October.

“We cannot keep bringing our sick and dying down here," says Richard Alles of the Uniformed Fire Officers Association (UFOA) Local 854, referring to the members who have joined rallies supporting Zadroga despite their chronic illnesses linked to their Ground Zero work.

Earlier this month, the International published a full-page ad in the Milwaukee Journal Sentinel on the morning of the GOP presidential debate. The ad headline read: “A Question Worth Asking in Tonight’s Presidential Debate – Where do you stand on the 9/11 Health & Compensation Act?” It was directed squarely at three Republican candidates on the stage that evening in Milwaukee: Senator Marco Rubio (R-FL), Senator Rand Paul (R-KY) and Senator Ted Cruz (R-TX), none of whom, at the time, had cosponsored the Zadroga reauthorization. Senator Rubio has since signed onto the bill.

Holding lawmakers’ feet to the fire, the IAFF’s production team at E-18 Media has produced video ads for the Citizens for the Extension of the James Zadroga Act to post on social media calling out U.S. lawmakers who are standing against Zadroga and praising those, including Senator Lindsey Graham (R-SC), who support the bill. The ads are running in the home states and districts of each lawmaker.

The bipartisan legislation to continue providing care and compensation to thousands of survivors and first responders who helped the nation recover in the aftermath of the 9/11 attacks has 65 Senate cosponsors and more than 250 House cosponsors. It was introduced by Senators Kirsten Gillibrand (D-NY), Charles Schumer (D-NY) and Mark Kirk (R-IL) in the Senate, and Representatives Carolyn B. Maloney (D-NY), Jerrold Nadler (D-NY) and Peter King (R-NY) in the House.

The bill to renew the Zadroga Act enjoys bipartisan support and would easily pass if it gets to a floor vote. According to Senator Schumer, lead advocates for renewal were negotiating with House and Senate leaders in order to get the bill to the House floor for a vote before departing in December for the holidays.
Google Tweet Pin it
Tweet
More Articles By This Author
Dangerous Tax on Workers’ Healthcare Defeated
Dangerous Tax on Workers’ Healthcare Defeated – For Now – Due to IAFF’s Aggressive Lobbying ...
Battalion 5 - February 2017
Submitted by Battalion Director Tom Simcoe​ I am pleased to report that House Bill 1884 in the ...
You are now being logged in using your Facebook credentials