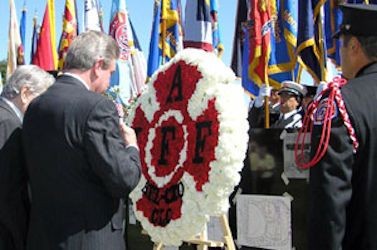 The IAFF commends Prime Minister Justin Trudeau and the Liberal Government and Ralph Goodale, Minister of Public Safety and Emergency Preparedness, for listening to the IAFF and other first responder agencies and for following through on a commitment to address this longstanding and important issue.

Goodale has been a long-time champion of the benefit. It was a key element of his private member’s motion, M-388, which was adopted in the House of Commons in 2012, and he moved the item forward swiftly after he was appointed Minister in 2015.

Thanks also go to the many IAFF members who helped lobby the issue on Parliament Hill at every edition of the IAFF Canadian Legislative Conference since 1992.

“The IAFF commends the Liberal Government for keeping its promise and for establishing a Community Heroes benefit in Budget 2017,” says General President Harold Schaitberger. “This benefit will allow a grateful nation to formally recognize the sacrifices made by fallen fire fighters and other public safety officers and will ensure once and for all that their families don’t have to worry about their immediate financial security.”

The benefit, a one-time, tax-free and direct payment to the surviving family of fire fighters, police, paramedics and other public safety officers who die in the line of duty, establishes a minimum baseline of compensation that the survivors of all public safety officers across Canada are entitled to, regardless of the city or province in which they worked.